The Deësis mosaic, (Circa 1261) is a traditional iconic representation of  Christ Pantocrator carrying a book, and flanked by the Virgin Mary and St. John the Baptist, with their hands raised in supplication on behalf of humanity.

Referred to as the Church of the Holy Wisdom for many centuries, the Hagia Sophia is the most important Byzantine structure and one of the world’s great monuments.  This incredible structure has been a church for 916 years, a mosque for 482 years and now a museum for for over 82 years!

The original cathedral is said to have been built by Constantine the great in 325, on the foundations of a pagan temple.  After a fire in 404, it was restored under the rule of Theodosius II.  Once again it was destroyed, this time in in the fires of the Nika Rebellion of 532.

The current structure  was built between 532 and 537 .  It was ordered and personally supervised by Emperor Justinian.  The architects, tasked with bringing to life the grandiose vision of the Emperor Justinian, were Anthemios of Tralles and Isidoros of Miletus – who were professors of geometry at the University of Constantinople.

The great dome was rebuilt after an earthquake caused its collapse in 557; then rebuilt by Isidoros the Younger; there were other partial collapses in 989 and 1346.

The main architectural feature is the awe inspiring 32-metre center dome pierced at the bottom by closely spaced windows and supported on pendentives (a triangular segment of a spherical surface) and two semi-domes. The jambs were lined in gold mosaic, thus reflecting golden light and creating magical illusion of a suspended dome floating above the visual splendor of the cathedral.

above photo – note on the top of the Imperial Gate doors are embossed columns within an arch, this indicates the entrance to the temple.

above photo -Imperial gate mosaic (886 and 912 AD) depicting Christ Pantocrator holding a book with the inscription “Peace be with you. I am the Light of the World.” Christ is surrounded by roundels portraying the Virgin Mary and the angel Gabriel. At Christ’s feet is a bearded emperor, who is believed to represent Leo VI asking for forgiveness.

Such a vast building at the center of court life required a significant body of people for both ceremonial functions and upkeep.  At the time of Justinian, the Hagia Sophia was staffed by 60 priests, 100 deacons, 40 deaconesses, 90 subdeacons, 110 lectors, 25 psalmists and 100 doorkeepers. (from Justinian’s Flee by Julian Rosen)

The Basilica was looted in 1204 by the Venetians and the Crusaders on the Fourth Crusade.  These invaders also replaced the patriarch of Constantinople with a Latin bishop.  The outcome was the division of the Greek Orthodox and Roman Catholic churches. The crusaders took much with them and most of Hagia Sophia’s riches can be seen today not in Istanbul, but in the treasury of St. Mark’s Basilica in Venice.

After the Turkish conquest of Constantinople in 1453, Mehmed II had the Hagia Sophia morphed into the principal mosque of Istanbul.  With the addition of minarets, a mihrab (a niche indicating the direction of Mecca), a minbar (pulpit), and disks bearing Islamic calligraphy – the immense building also became a model for many of the Ottoman mosques.

The Ottoman conquerors continued a symbolic interpretation, fabricating an Ottoman past and a Muslim legend for the building.  Eventually all the human faces depicted in the church’s mosaics were covered in plaster due to the Islamic prohibition of figurative imagery.

In 1934 Atatürk secularized the building, and in 1935 it was made into a museum

Above photo – Apse mosaic, depicting of the enthroned Virgin and Child, is the oldest of the surviving mosaics in Hagia Sophia.

The re-discovery of the figural mosaics after the secularization of Hagia Sophia was guided by the descriptions of the Fossati brothers, who had uncovered them a century earlier for cleaning and recording. The Fossatis also added the calligraphic roundels that remain today. They were commissioned to calligrapher Kazasker Izzet Efendi and replaced older panels hanging on the piers. (Holly Hayes)

The Hagia Sophia is so vast and full of information, it is one of the places that a guide can be invaluable.  However,  We were not very lucky, not only our guide but the other ones we eavesdropped on, seamed to be on a script of bad jokes and Turkish religious propaganda; continuously omitting legend and facts.  Hiring a local guide in sites like this one can expand one’s experience greatly.  We recommend contacting the history and architectural  faculties at local universities in order to get advice on how and where to hire a truly knowledagable guide.

above photo “The name given, Seraphim, is Hebrew and means “burning ones” (plural; the singular form is seraph). They are the closest to the throne of God, and as such are flame-like, “For our God is a consuming fire.” (Heb 12:29);
The six wings are arranged in a particular way: two pointing down (covering the feet), two up (covering the face), and two outstretched (in order to fly). The face was covered by a star when  it was converted into a Mosque; during our visit the restoration department was starting to uncover the faces.

above photo – bottom left note the sculpted Egyptian key of life and the Freemasonry symbol, this mark is on each column’s capital

The circle, where the Emperors would be enthroned

Detail of the mosaic in the Vestibule of the Warriors (Circa X century) Virgin and Child between Justinian I presenting the church of the Hagia Sophia (above), which he rebuilt. and Constantine tine the Great holding a model of the city of Constantinople (Istanbul) as an offering  (below)

Visible from many spots around Istanbul, the Sultanahmet Mosque dominates the skyline. Commonly, it is known as the Blue Mosque, because of the blue ceramic tiles of different tulip designs, from Iznik city (Nicaea), that line it’s interior.

Sultan Ahmed I, had it built between 1609 and 1616 over the site of the ancient hippodrome and the palace of the Byzantine emperors.  Facing the Hagia Sophia, the Sultanahmet Mosque was desigened by royal architect Sedefhar Mehmet Ağa.


The  tablets on the walls are inscribed by the  17th century calligrapher Ametli Kasım Gubarımare with the names of the caliphs and verses from the Quran. One will also find beautiful examples of Arabic calligraphy by Seyyid Kasim Gubari.

The upper levels of the Mosque’s interior are dominated by blue floral drawings and stained glass windows. The coloured glass for the windows was a gift from the Signoria of Venice to the sultan.   Unfortunately time and poor taste have replaced many of the windows with modern versions with little or no artistic merit.

The mosque has six minarets each with three balconies (Called Şerefes).  This was unusual, and a cause of public unrest, as most mosques only have four minarets. Six was a number reserved only for Mecca.  As a good solution, more more minarets where added to Mecca – and the conflict was settled!

The design of the Sultanahmet Mosque is the culmination of over two centuries of both Ottoman and Byzantine temple development.  It incorporates Byzantine elements, from the neighboring Hagia Sophia, with traditional Islamic architecture.  This wonderful structure is considered the last great mosque of the classical period of the Ottoman Empire.

The Blue Mosque is an active religious site, so it’s closed to non worshipers for a half hour or so during daily prayers.   Before stepping in to Mosque, be sure to take off your shoes, women should bring a large scarf to cover the head and shoulders (but if you forget  you can rent one at the door).  In a kind of kitchy but fun actvity,  you can book  a photo shoot with traditional Ottoman Costumes in the Blue Mosque via the Ottoman dream studio.

The Sultanahmet Mosque is on the must see list of any good site-seeing tour of Istanbul.  It is a true marvel and a testament to builders of another age.  The complexities of its vaults and tiling is a site to behold. 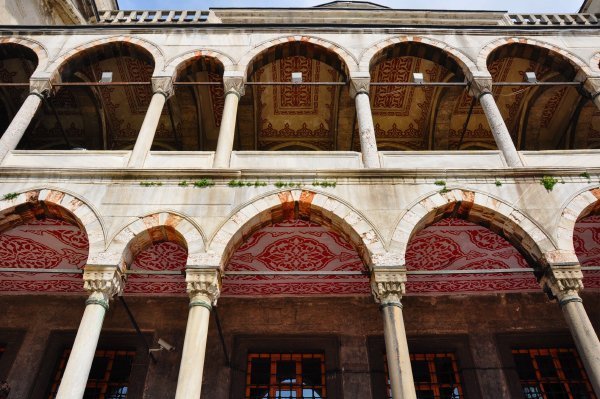 After 1603, the partially constructed structure gradually fell into ruins; and was severely damaged during the Great Fire of Istanbul.  In order to cover costs of restoration and upkeep, the nearby Spice Bazaar was created.

With 66 domes and semi domes in a pyramidal arrangement, the New Mosque dominates the skyline as you approach via ferry.  Although it is not as high up on the tourist list as the Blue Mosque; Yeni Cami holds a more peaceful and mystic aura. 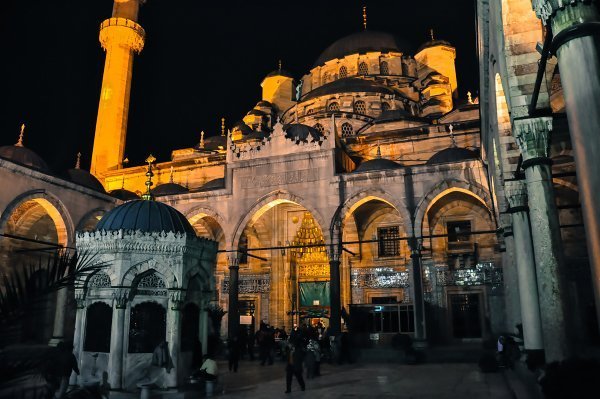 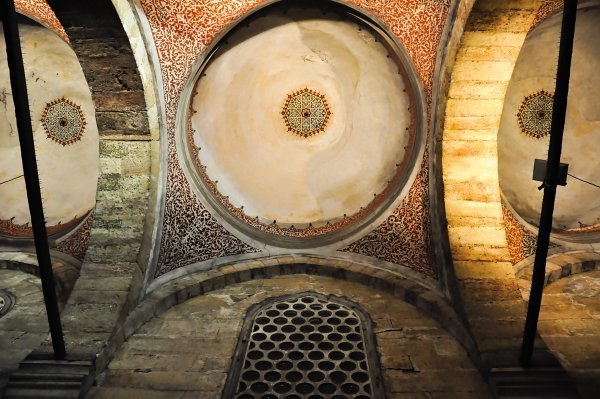 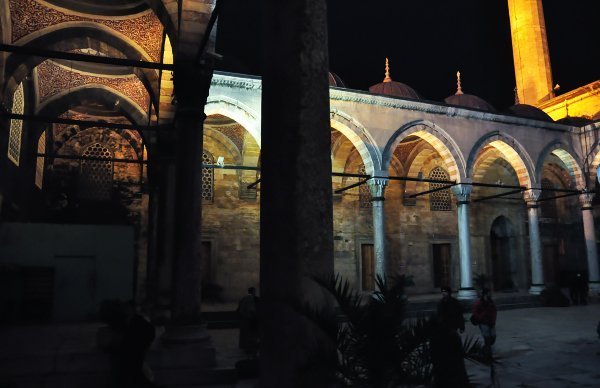 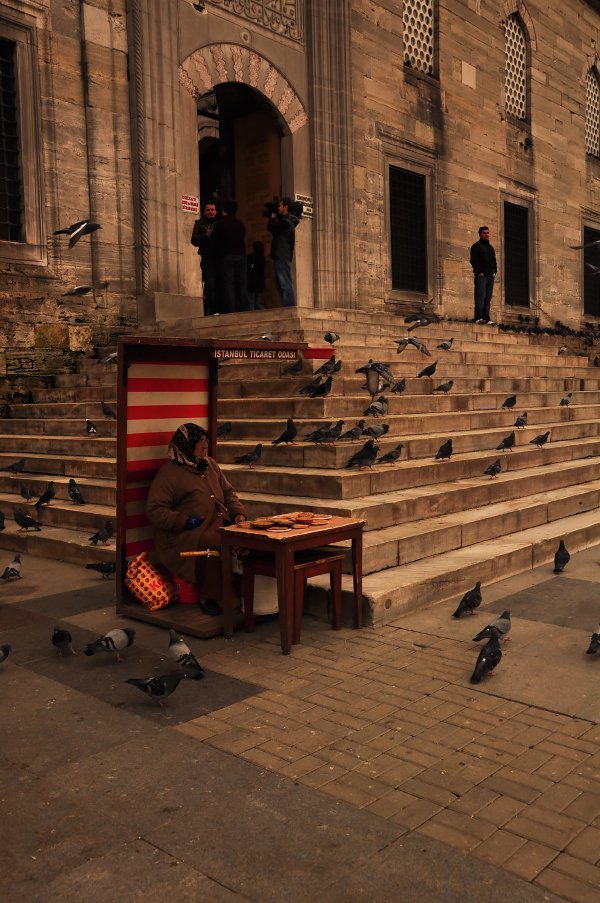 Built by Constantine and enlarged to its present form by Justinian, Yerebatan Sarnici is the largest of several hundred ancient underground cisterns.   Created to irrigate the gardens of Constantinople and the Byzantine Palaces, it has the capacity to store 100,000 tons (23,965,000) gallons of water

The different styles of the columns suggests them to have been recycled from the ruins of older buildings brought to Constantinople from various parts of the empire.

Yerebatan Sarnici was forgotten for centuries.  It was re-discovered in 1545 by Petrus Gyllius, a french topographer, sent to Constantinople by King Francis I with a mission to find ancient manuscripts.

It is fun to note that this forest of columns and brick vaults was featured in the Bond film “From Russia With Love.

The entrance is next to the Tourism Police station and is fairly nondescript.  We recomend you bring your own music and headphones.  The site is fantastic, but the tourist chatter that reverberates down the halls can take away the magic.

Column resembling the columns of the Triumphal Arch of Theodosius I from the 4th century (AD 379-395). Ancient texts suggest that the tears  on the column pay tribute to the hundreds of slaves who died during the construction of the Basilica Cistern.